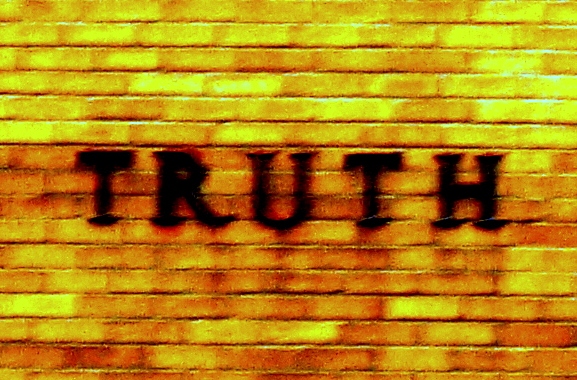 “Then Jesus said to the Jews who had believed him, ‘If you continue in my word, you really are my disciples. You will know the truth, and the truth will set you free.’”‬‬ (CSB – Read the chapter)

When Jesus had been arrested and tried by the Jewish religious authorities, they handed Him over to Pontius Pilate, the Roman governor of Judea, because they wanted Him crucified and they didn’t have the authority to impose such a sentence. Pilate was an interesting guy, but one we’ll have to talk about another time. What’s of interest right now is that as Pilate questions Jesus to get a sense of who this man was that so enraged the members of the Sanhedrin, he asks a question that rings far more loudly today than it did then: What is truth?

Now, what could Jesus have said to prompt such a question? He said this: “I was born for this, and I have come into the world for this: to testify to the truth. Everyone who is of the truth listens to my voice.” This was a short version of something Jesus said earlier in a conversation He had had with the Pharisees and which you can see right here.

What’s interesting is that, although the reactions both ancient and modern are the same, it’s not the same part that does it. For Jesus’ original audience, it was the idea that those who were truly His disciples followed His words and not the Law. Jesus was abundantly clear throughout His ministry that He was the fulfillment of the Law and that His words mattered where the Law used to matter. Someone couldn’t be unclear on that point and be a committed disciple of His.

For us, it is this second statement that is such a game changer. You see, our culture still asks the same question Pilate did, but with even more skepticism. What is truth? In fact, we’re bolder in our asserting that truth isn’t a thing at all. Truth is a fluid concept whose shape is defined by the particulars of the situation we’re in at the moment. In a different situation with different particulars, truth will be something else.

Yet Jesus wasn’t unclear on this point. It is the truth that will set us free. There is such a thing as truth. It is real and objective. It does not change based on our whims. It exists regardless of what we would like it to be. We can either adjust our lives in light of it or else we will eventually crash our lives into it. That’s never a pretty sight.

Now, many will balk at this point, arguing that freedom is the ability to pursue our hearts’ desires without any compulsion; it is always having been able to do other than what we chose to do. Because of this, Jesus can’t be right about freedom here because they don’t want to do life His way, they want to live their way. They are being compelled to this end with the threat of punishment. Therefore this can’t be real freedom. And, while I don’t necessarily disagree with that understanding of freedom, the objection itself is rooted in the belief that truth isn’t a real thing, or at least is a fluid concept. If it’s not, then they have a problem.

If truth is real, then we can want to do what we want without compulsion to the contrary all we want, but at some point we’re going to crash into truth and we won’t be able to do what we want anymore. If this is the case—and not only is Jesus making this argument, but there is a great weight of anecdotal evidence in the form of people who tried to live otherwise and found out they were wrong in favor of it—then the only way we are going to find real freedom is to adjust our desires in light of the truth.

In other words: When we want what is true, we will be free. But how do we do that? How do we make such an adjustment? Jesus already told us. We become His disciples. We keep His words. His words define truth. When we commit ourselves to knowing and doing them, we will know the truth and we will be able to live in light of the truth. Then we will be free.

The question is, then: How badly do you want freedom? Do you want it badly enough to give up living however you want and adjust what you want to what Jesus has said? Or, are you content to remain a slave to something else, seeing how far you can stretch your chains before they snap you back to reality? You’ll be able to pursue what you want for a while, but those chains tend to lose their elasticity over time the more they are tested. Life and freedom are found when we commit ourselves to doing life Jesus’ way, when we commit to following Jesus. Why not try that instead? You’ll be glad you did.